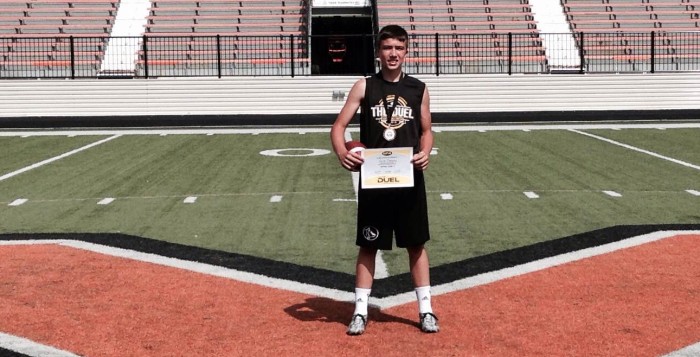 When July rolls around, talented young quarterbacks from all over the country converge on Massillon, Ohio, to compete in the Duel, NFA’s premier event.
QBs come from the West Coast. The East Coast. They come from the South and Southwest. From the Midwest.
This summer, Xavier Tremblay traveled from Canada to the Duel. It was a very productive trip.
“The Duel was an unforgettable experience for me in terms of development, technique and execution, as well as in terms of culture,” Tremblay said. “I was so impressed by everyone’s love for the sport of football.”

Tremblay is a freshman at Les Loups de Curé-Antoine Labelle in Laval, Québec, which is located just outside of Montreal. He is right in the middle of hockey country, but he has always preferred playing football.
“I never played hockey,” Tremblay said. “I love playing football because it’s a team sport and it has the feeling of being a family.”
Not only does he love playing football, the sport helped Tremblay become a better student in school.
“I began playing football at the age of seven,” he said. “Having attention troubles that made school difficult, football became my escape. I felt accomplished and as though I was truly performing as I relied on my athletic abilities. As it would be, my results at school also greatly improved. This season will mark my sixth year of playing this amazing sport, every season having been at the quarterback position. I love being a QB, it is a challenge for me every time I step onto the field.”
Tremblay has already established himself as a Canadian quarterback to keep a very close eye on.
“I was honored to receive, in Grade 7, the MVP award and in Grade 8, the Offensive Player of the Year award,” he said. “My objective this season, in Grade 9, is to bring home the championship, the Bol d’or. Every year, we’ve reached the final rounds of the competition. This year, our goal is to win it all.”

Tremblay entered his freshman season at Les Loups de Curé-Antoine Labelle with plenty of confidence after finishing third at the Duel.
“I was extremely happy,” he said. “I was pleasantly surprised by the scores I obtained at the Duel since it was my first competition of this sort. I did not expect to come in first in my category nor third at the final. My results have only motivated me to be even better at the next Duel.”
Before competing in the Duel, Tremblay attended his first NFA camp in Montreal that was headed by JC Boice.
“NFA is very intense about football and that is something that has really helped me,” Tremblay said. “I am very happy with my ability to read defenses, and I love having the football in my hands. I’m working on my mobility and my patience when I have the ball, and I am working to improve my overall technique.”